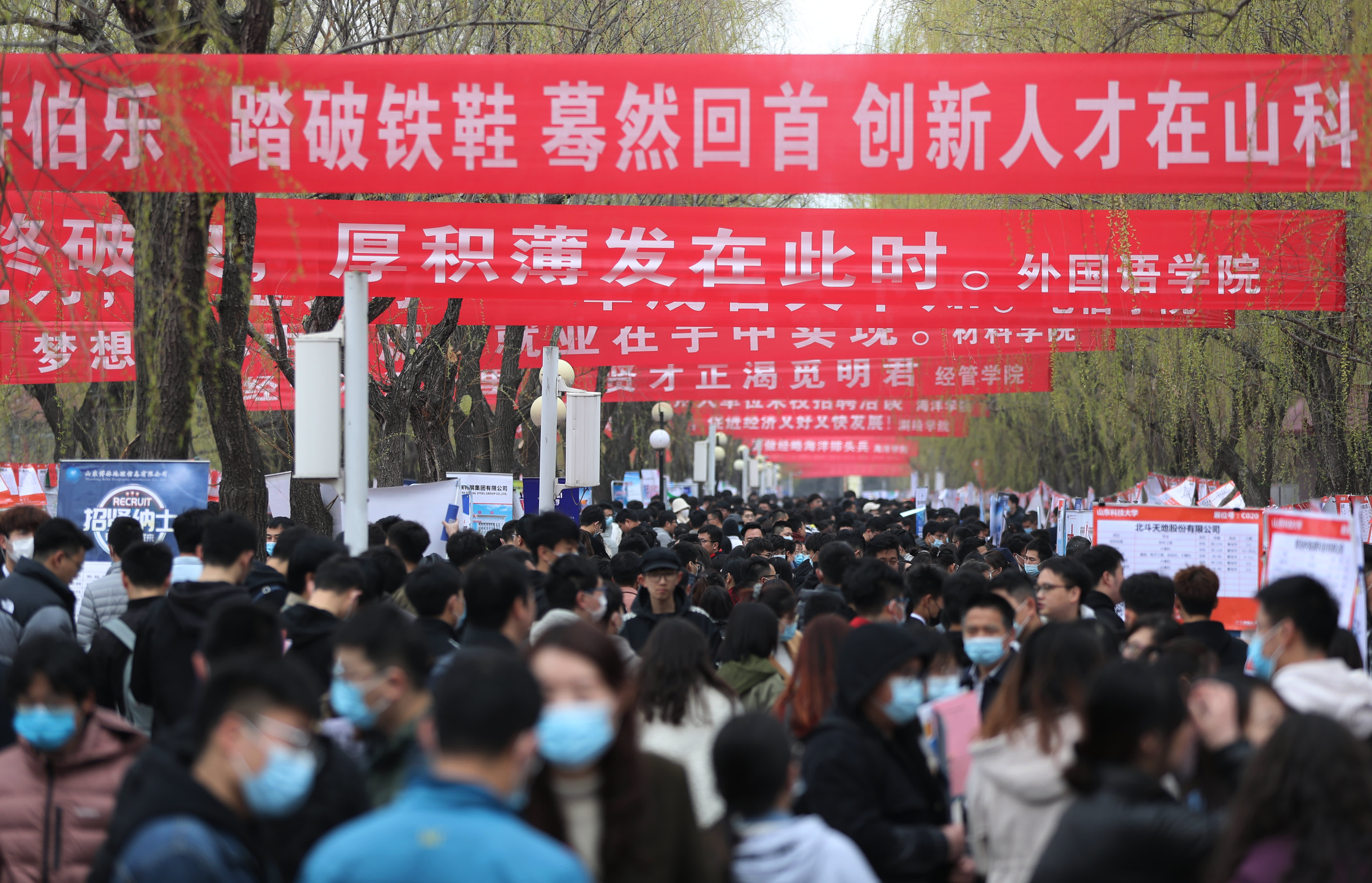 Graduates attend a job fair at Shandong University of Science and Technology on March 20, 2021 in Qingdao, China.

BEIJJNG – Despite China’s rapid recovery from the pandemic, many local graduates are opting for government-sponsored jobs or postponing their careers.

China was the only major economy to grow in 2020. But more than a year since the pandemic began, the 2021 class is still under pressure from high housing costs, international travel restrictions and an intense competitive environment.

Last month, CNBC spoke to more than ten local and international students from higher education programs in mainland China. Many of the sources asked for anonymity so that their names would not be associated with a foreign news organization. While these anecdotes are not to be equated with qualitative research, they reflect general employment trends for the record 9.09 million graduates in China this year.

A 24-year-old, who asked for anonymity, said she had accepted an offer from a major bank in Beijing to secure jobs. After the pandemic, companies that were too small or privately owned didn’t seem as stable as state-owned ones, she said.

Many women in her senior year also preferred jobs in state-owned companies, she said, noting that male classmates tended to take jobs in tech companies where the pay was higher but the hours were much longer.

The trend is nationwide. Chinese recruitment website Zhaopin found that 42.5% of graduates named state-owned companies as their first choice for a job – up from 36% last year.

In contrast, the percentage that opted for the private sector decreased from 25.1% to 19%. Overall, students were less inclined to enter the labor market – the study found an 18.9 percentage point decrease in graduates who took up traditional jobs. Instead, they opted for freelance work, a gap year, or an advanced degree.

“When I started thinking about work, the pandemic was already very severe,” said a master’s student at Beijing Communication University of China, who asked for anonymity. That comes from a CNBC translation of the interview in Mandarin.

The 28-year-old spent the pandemic studying at his home in northern Heilongjiang Province and then taking a doctoral examination. “It’s not that easy to get a job this year,” he said, although he is confident that there will be solutions to any problems he may face.

With the increased interest in university programs, competition among exam candidates is increasing. According to state media, a record 3.77 million people took the master’s examination in December.

Another communications college student, Qu Zhiyuan, 25, said her high and middle school classmates at home in eastern Shandong Province are having a harder time getting a job. Even for low-level jobs in government, there have been complaints about competition from Chinese returning from studying abroad.

“I feel like I’m the most diverse,” Qu said, according to a CNBC translation in Mandarin. While most of her classmates are taking exams for public service, state-owned corporations, or entering finance, she takes a job with a film producer and distributor in Beijing.

Instead of worrying about her own future – whether it leads to France or the US – she worries about how capital can manipulate people. “Big data can calculate when (the audience) will cry,” she said.

A 26-year-old musicologist who applied for anonymity, grew up in Gansu Province in the Midwest and is looking for a tech job in the coastal metropolis of Shanghai – which he is paying well enough to pursue his plans for to support a study abroad.

He is open to a long-term stay abroad and hopes to get married when his work situation has stabilized. His longtime girlfriend plans to go to Europe later this year, he said.

Many Chinese mainland students have put their study abroad plans on hold due to the pandemic and geopolitical tensions, if not indefinitely.

Covid and visa restrictions are bigger challenges for going abroad than being rejected by schools, said Xie Hangjian, 22. He said about half of his friends intend to do masters abroad.

Xie graduated from NYU’s joint venture in Shanghai and has a job with a major US investment bank in the city.

“Despite Covid and the worsening geopolitical climate, some of the largest multinationals are still hiring a lot of new graduates, especially in mainland China,” he said, citing the economic recovery.

International students remained interested in China, with a record more than 16,000 foreign applicants for NYU Shanghai’s 500 places this fall. A one-year masters program in Beijing, launched by Blackstone founder Steve Schwarzman, received 3,600 applicants in the fall, up from 4,700 the previous year.

Despite being unable to enter China due to virus-related visa restrictions, Schwarzman Scholar and 23-year-old New Zealander Nina Jeffs said she was able to do a remote internship at a start-up last year where she learned about Chinese workplace culture and sustainable aviation fuels .

“It’s easy to forget that China is a huge, very diverse country, and I think that’s something I’ve gotten a lot more insight into this year,” she said.

Upon graduation, Jeffs will work with a think tank to explore climate change policies that support greater gender equality. She hopes to visit China for some of this research.

For overseas students who can enter and stay in China, many continue to enjoy the local growth.

Despite being paid less than the US or Europe, John Dopp, 22, plans to stay in China, where he got a job on the overseas marketing team of a Chinese video game company. Dopp, an American, graduated from NYU Shanghai with a degree in finance.

“I’m very excited to start my career here just because it feels like there are so many options,” he said, noting that many Chinese companies are looking for foreigners to help their businesses expand overseas to help.

Will Covid Vaccines Turn into Much less Efficient?